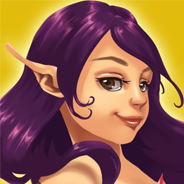 We're super excited to announce the expansion of our little team here at Esoteric Software! Erika Inzitari has joined our efforts. For this intro, we switch things up a little, interview style.

Welcome to the team, Erika! Tell us a little bit about yourself and your background

I'm a girl who happens to like Spine very much! Previously, I went to an art academy, later I enrolled in a communication design curriculum at university. But what I really like is the idea of motion and transformation! At the age of 3, I decided I wanted to do something involving animation when I grow up. Watching movies on VHS, my favorite parts would be all the moments involving magic: a mouse turning into a horse, or a monkey into an elephant, anything was possible! I also was a lucky child as my farther taught me how to use Windows when I was 4 years old. Since I didn't have many games, I'd play around with the .exe files in the system32 folder, developing an affinity for computers (and not destroying any in the process). Those were the days! This eventually led me to look into game development as well. I've since joined a few game jams and have worked with gaming companies as an animator/rigger. It's my dream to create an interactive children's story one day, and take a stab at animated films & cartoons.

What brought you to Spine?

This is actually a bit of an awkward story. I first saw Spine when my partner researched animation tools and stated that Spine was "THE BEST TOOL EVER (tm)". I watched him use it with suspicious eyes, opposing his every cheerful comment about Spine just for the sake of opposing, saying I don't like the fact that the animations were so fluid and puppet-like, and that the price was a bit too high to spend on software I didn't know and I wasn't sure was usable for me.

Sometime later, he started talking about Spine again, pushing it as the perfect tool for what I wanted to do. I bit the bullet and started watching videos about Spine, reading up on features, checking out comparisons written by other people, checking out (amazing) works of art others have achieved using Spine. Not wanting to give him the satisfaction of being right too quickly, I said, "OK, maybe I can give this a try". I started playing around with it on the side while working for a gaming company who hadn't yet adopted Spine. At my next gig, Spine was already a requirement, so I bought me that sweet sweet Spine Professional and got to work.

I invaded the Spine forums with my first questions. Not expecting a quick answer, I checked back 2 weeks later. To my surprise, my questions had been answered immediately! This made me feel so bad, I started checking the forums daily (because even with my amazing computer skills, I couldn't find the subscribe button, which I only discovered 2 years later...). Once I knew enough, I started returning the favor, answering other people's questions, since everyone was super kind. Suddenly I found myself being very passionate about the software and especially the community.

Which is when my partner started to get his revenge... He'd nag me once in a while with a well placed, "Oh, Spine again? Wasn't that that software with too fluid and puppet-like animations?". (I swear this happened again yesterday evening!).

I couldn't help but tell him I was totally wrong, and that I'm happy he proved me wrong! I fell completely in love with Spine and think it's the best software around for 2D animations in games.

What's your role on the Spine team?

As an animator and Spine connoisseur, my role is to assist people with their Spine Editor related questions. I love some good problem solving, especially if it helps others! I'll also be in charge of a workflow-oriented tutorial series I'll be in charge of. I hope you'll find it useful!

Question from the audience. What ingredients were used to summon you from your magical realm?

You can find Erika on the forums and on Twitter.